This method could launch our children into an adulthood filled with high levels of inner peace and self-confidence. If every child was given these benefits our eventual opportunities for world peace would far exceed those promised by our military and its bombs and other threats. Indeed, if everyone received these benefits skillfully, our military, bombs and other threats would likely become unnecessary. War is not needed for those who truly have personal peace. 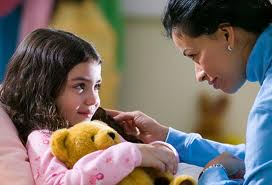 The basic idea is simple. Every night, while children are being tucked into bed, parents should ask...

Then, as the events are being told (both good and bad), the parents should lightly and lovingly either tap or gently rub the EFT points.

Experienced EFT'ers can readily see the benefit for tapping on the "bad" things (we'll talk about tapping on the "good" things later). As the child tells the story s/he is clearly "tuned into" the problem. Thus tapping on the EFT points during these moments is likely to resolve the issues or, at the very least, lighten their impacts on the child.  Theoretically, you could get even more done if you performed a full blown EFT session each night.  However, this is impractical and children will lose interest quickly.  Stick with this simple, but powerful, process.

This is critical for children because they are constantly picking up "stuff" from parents, teachers, peers, television and so on. These inputs go on daily and accumulate over the years to fill what we adults often call our "emotional garbage bags." If these inputs go unresolved, of course, they form unnecessary "limits" and thwart the attainment of our true potentials. These unnecessary fears, guilts, griefs and traumas often have a thunderous effect on our "adult realities" and cost us dearly in both our personal peace and our pocketbooks.

Some examples of the "bad" things children might bring up would be....

There are, of course, thousands of other examples that establish themselves as uninvited guests in children's psyches. Most of them are fictions and, arguably, may have a greater impact on how a child's life unfolds than does their education.

Alert parents have an obvious opportunity to ward off these "self confidence suckers" on a daily basis. Further, the process can be very nurturing for both parents and children because children love to be touched (tapped, rubbed) in loving ways. As you are loving your (our) children in this way, you can ask them more questions about "what happened today" and get even deeper into the issues. Further, you can offer reframes while doing EFT which are much more likely to be effective than if you were just bringing them up in normal conversation. 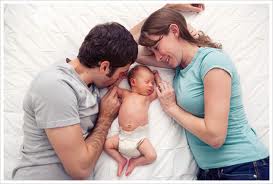 This whole process is also useful for pre-verbal infants. Even though infants are not able to tell you what is bothering them, the mere fact that they are crying or exhibiting other signs of distress tells parents that something (e.g. a fear, trauma or physical discomfort) needs to be resolved. During these times of distress the infant is "tuned into" the problem and thus primed for EFT. The addition of EFT tapping to the usual "there-there's" and other soothing language is likely to pay major long term dividends.

You may have noticed that I didn't include the EFT Setup phrasing within this process. It would be useful to fit it in, of course, although children seem to be in less need of it than adults. When adding it in you might wish to use the language below (children light up when saying it)....

As mentioned earlier, it is useful to tap the EFT points even while the child is talking about their "good" thoughts and happenings for the day. Properly done, the parental EFT'ing can add a soothing element to the discussion. Further, even though the child is discussing something positive, there is often a "comparing negative," or tail ender, behind it. For example, if the child says...

"My teacher complimented me today in front of the whole class."

"But sometimes she scolds children or ignores them and I am afraid that will happen to me."

In this case, even though the tapping is done on the "good" statement by the teacher, it is also likely to reduce the fear involved in the comparing negative. Thus, applying EFT to both the "good" and the "bad" items is likely to provide substantial benefits across the board.

Of course, we are all children (even though some of us have developed a few wrinkles) and thus this article need not be limited to a specific age group. Wouldn't it be nice, whatever your age, for someone to ask you about your childhood "stuff?" And wouldn't it be even nicer to resolve those issues daily? Maybe you could trade this favor with someone or just simply go through the process solo.

It's never too late to have a happy childhood.