NewThink #1: We Don’t Know the True Cause of Our Ailments 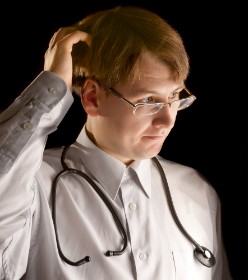 Here is where NewThink begins. If we understood the true cause of our ailments, this book wouldn’t be necessary. We don’t, however, and, as you will soon see, this is readily acknowledged by the medical profession.

I have great respect for the members of the medical profession and count many of them as my personal friends. It takes major dedication to endure the process of medical school and internship and even more dedication to serve the complex needs of patients.

What is the true cause?

Doctors and nurses are often frustrated because the true cause for diseases has largely escaped them. Despite the massive amounts of time and money spent on medical research, our dedicated physicians have been largely compelled to manage only the symptoms of our diseases. Cause, for most diseases, remains on their wish lists.

Looking in the wrong place:

This is because medical researchers tend to look for causes in the wrong places. For example, medical research points to the fact that depression seems to be associated with a chemical imbalance in the body. Accordingly, a counter-balancing chemical (drug) is introduced and the patient feels better. However, patients must continue to take the drug or their symptoms reappear.

Thus, the drug does not cure the problem. Rather, it temporarily masks the symptoms. It follows, then, that a chemical imbalance cannot be the true cause of depression because that imbalance, properly understood, is just another symptom. Ultimately, we need to find what causes the imbalance. Then we will be closer to true cause.

This same reasoning applies to every disease I can think of. Cancer, for example, is not caused by cells going awry, although that cell behavior often becomes the focus of medical treatment. Our devoted medical professionals can sometimes kill off the offending cells with radiation or chemotherapy and remove tumors through surgery. But, even though these processes may have some degree of success, they do not address what caused the cells to go awry in the first place. Thus, the procedures often fail and, in other cases, the cancer returns after a temporary remission.

Open admissions - we don't know the cause:

Out of curiosity, I spent two hours one morning looking for the causes of our various ailments on WebMD.com, one of the largest, and considered more authoritative, medical websites currently available. I could find nothing resembling a true cause for any disease. In fact, the inability to understand true cause is readily admitted. Here are a few quotes (emphasis added) representing the multitudes of open admissions in this regard:

“Doctors still don’t understand what causes multiple sclerosis, but there are interesting data that suggest that genetics, a person’s environment, and possibly even a virus may play a role.”

“Experts aren’t sure what causes migraines. They run in families, and experts have found a genetic link. But it isn’t clear why some people get migraines and others don’t.”

“No one really knows what causes asthma. What we do know is that asthma is a chronic inflammatory disease of the airways.”

“The exact cause of irritable bowel syndrome (IBS) isn’t known. But health experts believe that faulty communication between the brain and the intestinal tract is one cause of symptoms.”

“Doctors don’t know exactly what causes Rheumatoid Arthritis. It may be a combination of genes and environment. Some researchers think an infection with a bacteria or virus can trigger the disease in some people, but so far, they don’t know what virus or other organism does that.”

“In most cases, the cause of scoliosis is not known. This is called idiopathic scoliosis. It develops mostly in children and teens and appears to be related to several things, including genetics, as it often runs in families.”

“Doctors don’t know the exact cause. You may have genes that put you at risk. An infection with a bacteria or virus may be a trigger that sets the disease in motion.”

“No one knows exactly what causes ADHD, but certain things are known to play a role.”

“The cause of dyslexia is not clear, although it is probably an inherited (genetic) disorder because it runs in families. Some studies have shown that people with dyslexia have abnormalities in the functioning of the areas of the brain involved in reading and language.”

“The exact cause of anxiety disorders is unknown, but anxiety disorders — like other forms of mental illness — are not the result of personal weakness, a character flaw, or poor upbringing. As scientists continue their research on mental illness, it is becoming clear that many of these disorders are caused by a combination of factors, including changes in the brain and environmental stress.

"The exact cause of panic disorder isn’t clear. It is thought that it may be caused by an imbalance of chemicals in the brain (neurotransmitters). It also may be passed down through families (genetic).”

“The cause of phobias is unknown. If you have a family member with a phobia, you are more likely to have a phobia.”

“The exact cause of endometriosis is not known.”

“Experts don’t know what causes leukemia. But some things can increase the risk of some kinds of leukemia.”

“Doctors don’t completely understand the causes of bipolar disorder. But they’ve gained a greater understanding in re- cent years of the bipolar spectrum, which includes the elated highs of mania to the lows of major depression, along with various mood states between these two extremes.”

“Doctors don’t know what causes chronic fatigue syndrome (CFS). For many people, CFS symptoms start after a viral illness. In some cases, CFS seems to follow a major physical or emotional trauma or an exposure to toxins. But there is no single known cause of CFS.”

“Doctors don’t know exactly what causes eczema. The most common type of eczema — atopic dermatitis — resembles an allergy. But the skin irritation, which is more often seen in children rather than adults, is not an allergic reaction.”

This is a disappointing display and, regrettably, it only represents around one percent of the complete list. Thus, despite massive amounts of research money spent trying to find cures, our doctors have yet to be given a true cause for the vast majority of our diseases. Yet we rely on those physicians and, while we sometimes have success, we are all too often subject to unnecessary surgeries, misdiagnoses and side effects from prescribed medications. What better evidence could we have that medical researchers are aiming at the wrong target? They are looking for causes where they don’t exist. It’s like mining for gold in your bathtub. It’s not there.

Try this for your own ailment(s). Go to WebMD.com, or any other large medical website, and look for the true causes. If you can find one, let me know. However, in your search, please don’t accept as true cause definitions such as, “There appears to be a genetic tendency…” or “Those with Diabetes are more likely to suffer this disease…” or “Risk factors include…” Tendencies, second hand influences and risk factors are not causes. They merely help doctors form educated guesses with which they try to explain what is happening.